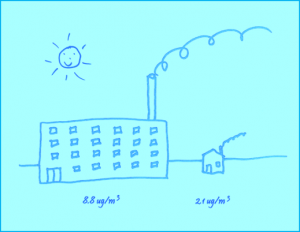 You may recall from last month’s article, that soil gas has potentially less impact in a commercial/industrial (C/I) setting than in a residential setting, due to the higher C/I air-exchange rate.  According to default modeling values, the C/I air-exchange rate is four times higher than the residential rate, which causes soil vapor to be diluted 4 times more in the C/I setting.  Additionally, the ceiling heights in C/I buildings are often more than 8 feet, causing soil gas to be diluted even more, relative to residences.

But there’s another difference in exposure between C/I and residential occupants.  Employees are in the workplace approximately 40 hours a week, while residents could be at home as much as 168 hours a week.  Consequently, the vapor-intrusion indoor-air target level is approximately 4.2 times higher for C/I settings than for residential settings.  For example, the U.S. EPA’s Vapor Intrusion Screening Level (VISL) for trichloroethene (TCE), using a Hazard Index of 1, is 2.1 micrograms per cubic meter (ug/m3) for residents, and 8.8 ug/m3 for workers. 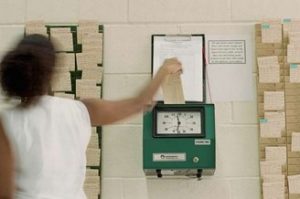 You might have noticed that various agencies may have slightly different target levels.  This is typically due to differences in assumptions about exposure time.  U.S. EPA’s Integrated Risk Information System (IRIS) uses a Reference Concentration (RfC) for inhalation of 2.0 ug/m3 for TCE, based on the assumption that inhaling vapors at or above that concentration, 24/7, continuously for 365 days, could cause adverse health effects.  The residential VISL is similar, but assumes exposure for 350 days per year, while the C/I VISL assumes an 8-hour day for 250 days per year.  The shorter exposure times bump the VISLs up to 2.1 ug/m3 and 8.8 ug/m3, respectively.  States and other agencies might have different target levels, based on slightly different exposure scenarios.  In a 2013 letter to the California Regional Water Quality Control Board – SF Bay Region, U.S. EPA Region 9 rounded the occupational exposure level up to 9 ug/m3, but recommended using 7 ug/m3 to account for 10-hour workdays.

From a political standpoint, workers are also regarded differently from residents as receptors, because they are presumed to be healthy, and to some degree, they are receiving financial compensation for their risks.  They are also assumed to be more enlightened than residential receptors about the risks of chemical exposure since they typically are familiar with Safety Data Sheets and other information that might be foreign to residents.

The remaining element of the vapor intrusion CSM, after vapors enter the building, is background contamination.  We discussed background contamination in the January 2015 issue of Focus on the Environment, but to review, background, for the purpose of vapor intrusion, consists of the volatile organic compounds (VOCs) and semi-volatile organic compounds (SVOCs) in indoor air from indoor sources and from the outdoor air.  The common gasoline components benzene, toluene, ethylbenzene, and xylene (BTEX) are ubiquitous in the background, but other compounds, including the highly controversial TCE, are also common in the background, often at levels near or above indoor-air VISLs.  Background in C/I facilities can be especially high, sometimes thousands of times higher than C/I VISLs, and yet far below the Occupational Safety and Health Administration (OSHA) limits.

All of this makes the vapor-intrusion pathway complex, or just plain confusing.  Setting up the CSM early in a project is essential to make sense of it all.