In previous issues of Focus on the Environment, we discussed the Conceptual Site Model (CSM) for vapor migration in terms of the partitioning of vapors from the soil or groundwater to the vapor phase, and in terms of groundwater transport and preferential pathways.  In this issue, we’ll discuss vapor migration through the vadose zone to the underside of a building (the sub-slab).

As shown in the figure below, volatile organic compound (VOC) vapors partition from groundwater to soil gas, through the transitional area known as the “capillary” zone, into the unsaturated or “vadose” zone, and to the underside of the building floor, or “sub-slab”. 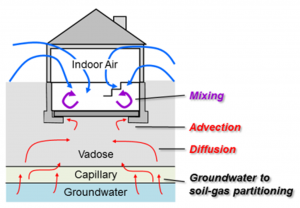 Chemical vapors migrate via two processes – molecular diffusion and advection.  You might remember an experiment in high school chemistry in which ink dropped into water gradually spread out over the entire container.  That’s diffusion, and it’s driven by the vibration of molecules.  Diffusion causes chemicals to migrate from areas of higher, to lower concentration.  Advection in the vadose zone is basically air flow, and it causes air (or soil gas), and the chemicals in air, to migrate from areas of higher to lower pressure.  Advective migration is generally much faster than diffusive migration, but advection doesn’t operate much more than five feet below surface, because the pressure differentials caused by wind, barometric pressure changes, and temperature differentials, are relatively small.  Consequently, while we associate vapor intrusion with sandy, permeable soils, diffusion in tight clay soils is also significant, especially more than five feet below grade.

Soil moisture is another critical factor to vapor migration and attenuation, because vapors diffuse approximately 10,000 times faster through air than through water.  But soil moisture varies seasonally, and the amount of vapor attenuation varies accordingly.  Perhaps more important, is a phenomenon known as the “rain shadow”, which causes soil moisture beneath a building to be lower than soil moisture adjacent to it.  EPA encourages the collection of exterior soil gas (i.e., collected next to buildings), as part of the Multiple Lines of Evidence (MLE) approach for vapor intrusion.  Unfortunately, exterior soil might contain far more moisture than soil beneath a building, and exterior soil-gas might give an overly optimistic picture of how much vapor attenuation is actually taking place.

Because chemical breakdown of VOCs is primarily the result of biological activity, chemical composition, oxygen content, and soil moisture all affect vapor attenuation in the vadose zone.

High oxygen availability in soil gas facilitates the breakdown of non-chlorinated VOCs, including petroleum hydrocarbons (PHCs).  Chlorinated VOCs (CVOCs) typically undergo much less chemical degradation in the subsurface, and in most cases, CVOCs break down most readily in low-oxygen environments.  Soil moisture is also required for the chemical breakdown of vapors.

In summary, the vapor attenuation in the vadose zone is generally lowest for CVOCs in dry, sandy soils, and highest for PHCs in moist, clay-rich soils with lots of oxygen.  Shallow soil gas tends to migrate mostly by advection, while deep soil gas migrates primarily by diffusion.