In previous issues of Focus on the Environment, we broke down the Vapor Intrusion Conceptual Site Model (CSM) into three parts – source, migration, and receptor.  Last month we discussed vapor sources.  In this issue, we’ll discuss vapor migration.

Partitioning is the transfer of chemicals from one medium to another, in this case, from soil or groundwater to air.  Vapor partitioning from water to air is a function of the chemical’s concentration, temperature, and the chemical’s Henry’s constant, all of which are understood for a properly-assessed site.  Vapor partitioning from soil to air is complicated by the additional variables of soil composition and structure, which are typically less well understood.  Consequently, contaminated soil is regarded as a VI risk, but no one knows how great a risk it is.  The threat from VI compounds in the soil can only be evaluated by sampling them after they partition to groundwater, soil gas, or air.  EPA’s spreadsheet versions of the Johnson and Ettinger (J&E) model can predict VI risk from the soil, groundwater, and soil gas, but the model is falling out of favor, and many regulators never did accept the soil model, due to questions about its accuracy.  Similarly, maximum allowable concentrations – screening levels – are widely available for VOCs in groundwater and soil gas, but rarely for soil.

A primary source is where chemical vapors migrate directly from a source to indoor air.  A secondary source is where chemicals are transported through another medium, typically a groundwater plume, and vapor migrates upward from the plume.  According to EPA’s VI Guidance, migration of chlorinated VOCs (CVOCs) is generally limited to a lateral distance of 100 feet from the source.  EPA’s Petroleum VI Guidance says that the migration of petroleum hydrocarbons (PHCs) is generally less than 30 feet because PHCs break down more readily than CVOCs.  Either way, at larger commercial/industrial facilities, primary vapor migration often poses a risk only to employees, whereas secondary migration via groundwater plumes might transport contaminants for miles, and expose people in residential settings.  This risk makes groundwater flow a key component of most CSMs.

The other complicating factor in vapor migration is the presence of preferential pathways.  Water mains, sewers, tunnels, and other buried features are typically surrounded by gravel or sand, which can facilitate vapor migration over distances much greater than 30 or 100 feet.  Subsequently, preferential pathways should be considered when putting together a VI CSM.  Any setting in which buried utilities contact a primary or secondary vapor source must be evaluated for the potential to transmit vapors to receptors. 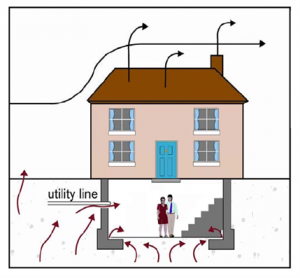