The Fundamentals of Vapor Intrusion

Conceptual Site Models (CSMs) are roadmaps that help ensure that you’re not leaving anything out of an environmental investigation, mitigation, or remediation project.  CSMs are not limited to vapor-intrusion (VI) investigations, but they’ve received much emphasis in VI guidance documents, perhaps due to the complexity of the VI pathway.

As described in New Jersey’s CSM guidance, “The goal of a conceptual site model is to provide a description of relevant site features and the surface and subsurface conditions to understand the extent of identified contaminants of concern and the risk they pose to receptors.”  There are three main parts to the CSM:

In other words, what chemicals are indicative of VI, what are their potential concentrations in indoor air, where these chemicals are coming from, where they’re going how they get there, and who they may affect.

The CSM is usually depicted in figures and text, and generally incorporates cross-sections, maps, flow charts, text, tables, and other information.  Because a CSM is designed primarily to understand and identify potential data gaps, there are two important aspects of a CSM that must be considered.  First, the development of a CSM is a reiterative process.  As new information is acquired in the course of an investigation, mitigation, or remediation project the CSM must be updated.  Second, a proper CSM must be thoroughly envisioned and identify where data gaps exist.  This helps steer data collection and makes it less likely that you’ll get to the end of a project before realizing something’s missing.

The generic VI CSM below is from EPA’s VI Guidance.  we’ve stripped out a lot of the detail, but for now, keep in mind the source, migration, and receptor.  The cause of the problem was an above-ground storage tank (AST) that leaked or was overfilled.  The primary vapor source is the contaminated soil beneath the AST.  Contamination migrates laterally from the source by multiple paths, including vapor movement directly from the source; the lateral flow of liquid chemicals, especially when they hit the water table; and dissolved chemicals in groundwater.  While we may think of them as insoluble, many of the chlorinated solvents, including tetrachloroethene (perc, PCE), trichloroethene (TCE), and trichloroethane (TCA), and the fuel components benzene, toluene, ethylbenzene, and xylene (BTEX), are soluble enough to migrate in groundwater, resulting in VI a mile or more from the primary source.  Groundwater is thus, a secondary source, from which vapors migrate into buildings, where they’re inhaled by receptors. 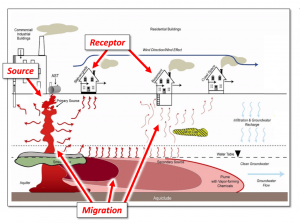