In the June 2014 issue of Focus on the Environment, we discussed vapor attenuation, which is the decrease in concentrations as vapor migrates from subsurface to indoor air.  Because of the complications involved with measuring indoor air, environmental professionals typically measure underlying groundwater, soil-gas, or soil contaminant levels and estimate the effect on indoor air.  One approach to estimating indoor concentrations from subsurface data is through the use of attenuation factors……. 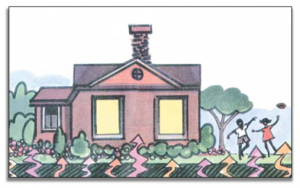 The first pass at estimating indoor air concentrations from subsurface data often involves the use of default Attenuation Factors (AF or a).  According to EPA’s Superfund Vapor Intrusion FAQs, “the term ‘attenuation factor,’ defined as the ratio of indoor air concentration to subsurface concentration, is used as a measure of the decrease in concentration that occurs during vapor migration and may vary with space and time.”  In EPA’s 2002 Draft VI Guidance, the default AFs for subslab, deep soil gas (> 5 feet below floor level), and groundwater were 0.1, 0.01, and 0.001, respectively.  Accordingly, if a compound in indoor air was present entirely from VI, not background, then the indoor levels would equal one-tenth of subslab levels, one-hundredth of deep soil-gas levels, and one-thousandth of groundwater levels – after accounting for vapor partitioning from groundwater.  Screening levels (SLs) for subsurface media were therefore established by multiplying the indoor air SL by 10, 100, and 1,000 for subslab soil gas, deep soil gas, and groundwater, respectively.  Accordingly, for an Excess Lifetime Cancer Risk (ELCR) of 10-4, the benzene SLs in the 2002 Draft VI Guidance were:

Notice that the groundwater SL looks very different from the deep soil-gas SL not only because of the adjustment for groundwater to air partitioning as calculated by Henry’s constant but because air and groundwater are measured with different units.

Default AFs are intentionally conservative, i.e., such that multiplying the concentration of a subsurface volatile organic compound (VOC) by the appropriate AF will overestimate the indoor concentration most of the time, and underestimate it only occasionally.

In 2012 EPA released the Vapor Intrusion Database: Evaluation and Characterization of Attenuation Factors for Chlorinated Volatile Organic Compounds and Residential Buildings.  Indoor and subsurface data were collected from a number of sites, screened for data quality, and compared to one another.  This box and whisker plot from the report represents the general findings. 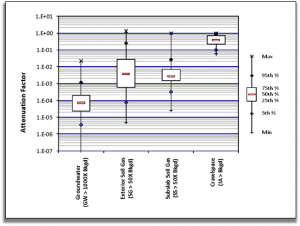 Groundwater provides the most attenuation, presumably because the soil overlying groundwater is consistently moist, and soil moisture plays a major role in attenuation.  The median value for groundwater attenuation was 0.000074, but a default AF of 0.001 was recommended, to coincide with the 95th percentile data, making the AF sufficiently conservative to protect occupants in 95% of buildings.

Surprisingly, exterior soil gas, which is normally collected at least five feet beneath a building, showed no greater attenuation than subslab soil gas.  Consequently, the default SLs for subslab and exterior soil gas are now both based on an AF of 0.1.  Not surprisingly, the range of subslab soil-gas AFs is far narrower than the range of exterior AFs, which is one of the reasons that Cox-Colvin prefers to collect more subslab data at the expense of deep soil-gas data.  Finally, due to communication between crawl spaces and indoor air, the attenuation of vapors collected from crawl spaces was deemed to be negligible and the crawl space default AF is 1.0.

It should also be mentioned that even after screening, some questionable data remained.  For example, the maximum values in the box-and-whisker plot for exterior soil gas and subslab soil gas indicate that indoor air was equal to indoor air concentrations, but it seems highly unlikely that indoor air was composed entirely of the soil gas at any of the tested locations.  A further critique of the VI database and data screening procedures is available in an article by Richard Song, et al.

EPA’s 2013 Final VI Guidance recommends a generic AF of 0.03 for subslab and exterior soil gas, while the recommended default AF for groundwater remains 0.001.  In 2012, EPA replaced the outdated SLs in the 2002 guidance with their Vapor Intrusion Screening Level (VISL) calculator.  The VISL calculator will be discussed in a future issue of Focus on the Environment. The calculator initially used the highly conservative AF of 0.1 for subslab to indoor air, but has since been updated to use the generic AF of 0.03, as recommended in the 2013 Guidance.

A number of groups, including Cox-Colvin, submitted comments on the Final VI Guidance, and a great many remarked that the default SLs for soil gas were too conservative.  Attenuation can also be estimated from mass balance calculations, and as discussed in the June 2014 issue of Focus on the Environment, the mixing of subslab soil gas with indoor air by itself would result in an AF of 0.005 is the most conservative setting.

Site-specific AFs should be estimated any time subsurface and indoor air are sampled concurrently, by dividing the indoor air concentrations for each compound by the subsurface concentrations.  In practice, if you collect more than one sample in any medium, or you detect more than one compound, you’ll probably calculate more than one AF.  Graphing your data on radar plots, as described in the April 2014 Focus on the Environment newsletter might help with the interpretation.  There are also several approaches to filtering data prior to calculating AFs.  EPA’s 2013 Guidance for Addressing Petroleum Vapor Intrusion at Leaking Underground Storage Tank Sites says of the AF, “It is defined mathematically as the concentration in indoor air divided by the concentration in soil gas at the source…….  The source is defined as the region of highest vapor concentration in the vadose zone.”  You should, therefore:

Site-specific AFs are occasionally determined using tracer gases.  Naturally occurring radon is an option, but measuring radon in subslab is not as simple as measuring it indoors, and because subslab radon has been reported to be even more heterogeneous than subslab vapors, the AF calculated from radon might not represent VI.  Sulfur hexafluoride (SF6) is also sometimes used, but it is costly and is a severe greenhouse gas.  It’s also tricky to inject SF6 into subsurface in a way that mimics the distribution of naturally occurring soil gas.

Finally, be aware that attenuation of non-chlorinated compounds, often associated with petroleum hydrocarbons (PHCs) can be attenuated far more rapidly than chlorinated compounds, so the site specific AFs, and depending on the guidance, default AFs for PHCs might be very different.  We’ll discuss PHCs in a future article, but next month’s Focus on the Environment will discuss EPA’s Vapor Intrusion Screening Level (VISL) Calculator, which is based on default AFs.