The Fundamentals of Vapor Intrusion – Attenuation

The Fundamentals of Vapor Intrusion – Attenuation 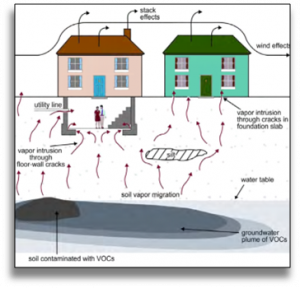 As discussed in the May 2014 issue of Focus on the Environment, vapor attenuation is one of the most important concepts in Vapor Intrusion (VI). Through a variety of processes, vapors decline in concentration as they migrate from source to receptor. One typically doesn’t sample indoor air early in a VI assessment because it’s inconvenient to building occupants, and because indoor air nearly always contains background constituents from indoor sources, which can be confused with VI constituents. Instead, one typically measures groundwater, soil-gas, or perhaps soil contamination, and estimates the risk of VI to indoor air. If you estimate excessive risk, you’ll probably be required to conduct further evaluation, install a vapor mitigation system, or place institutional controls on the property. Therefore, how and how much attenuation takes place becomes highly controversial…….

EPA’s 2015 Technical Guide for Assessing and Mitigating the Vapor Intrusion Pathway from Subsurface Vapor Sources to Indoor Air, paraphrasing Johnson, and Ettinger, says that “Vapor attenuation refers to the reduction in volatile chemical concentrations that occurs during vapor migration in the subsurface, coupled with the dilution that can occur when the vapors enter a building and mix with indoor air.” 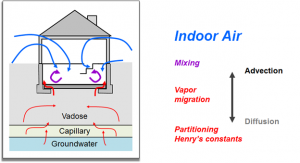 This figure illustrates the more or less standard VI model, in which volatile organic compounds (VOCs) migrate from contaminated groundwater. Vapor migration and attenuation have been broken into three components, starting at the bottom:

Partitioning from groundwater is mostly a function of water temperature and the chemical’s Henry’s Law constant, which are generally well understood. Partitioning from soil is far less predictable, which is why many guidance documents restrict or forbid the use of soil data for estimating VI risk.

After partitioning from groundwater, in the vapor migration stage, lots of attenuation takes place if there is sufficient soil moisture. Because there is always moisture in the capillary zone immediately above the water table, especially in fine-grained soils, vapor attenuation from groundwater is significant. But soil moisture above the capillary zone is highly variable, and so is the amount of vapor attenuation. In general, chlorinated VOCs (CVOCs) break down faster in low oxygen environments, and non-chlorinated compounds, often associated with fuels (petroleum hydrocarbons, or PHCs), break down faster in high oxygen settings. Overall, PHCs break down much faster than CVOCs, and chemical breakdown is typically ignored when estimating VI for CVOCs. Differences between PHC and CVOC behavior are discussed in depth in EPA’s 2012 report, Petroleum Hydrocarbons and Chlorinated Hydrocarbons Differ in Their Potential for Vapor Intrusion, and in EPA’s2015 Technical Guidance for Addressing Petroleum Vapor Intrusion at Leaking Underground Storage Tank Sites.

As shown in the figure, vapor migration takes place predominantly by advection – essentially air flow – in shallow soil (often regarded as 0 to 5 feet below grade), and by molecular diffusion in deep soils. Vapor migration via diffusion has two important implications. First, vapors from deep sources are limited by diffusion rate. Even in permeable soil, barometric pressure changes, the building’s heating/ventilation/air conditioning (HVAC) system, and other drivers of vapor flow have little effect below five feet. Therefore, the soil-gas entry rate of 5 liters per minute (lpm) per 100 square meters of floor area that is often assumed in VI models is a practical upper limit, and vapor intrusion rates generally won’t increase no matter how fast soil gas enters the building. The second key point is that vapors move more rapidly in permeable soils than in tight soils, but VI occurs in both.

The third part of vapor transport in which soil gas mixes with indoor air, is in many ways the most important part of vapor attenuation. At this point, attenuation consists of little more than diluting a small amount of soil gas with a lot of indoor air, so all compounds are attenuated equally. The rate of soil-gas entering a building is controlled by many factors, including floor area, width and number of floor cracks, and a number of other things that may be difficult or impossible to know. But as discussed above, a soil-gas entry rate of 5 lpm per 100 square meters of floor area is at the high end. EPA’s default building, for the purposes of VI modeling, has a length and width of 10 meters with a 2.44 meter ceiling (8 feet), which works out to 244 cubic meters of indoor air. So if the air inside a residence turns over at the conservative default rate of once every 4 hours, 5 lpm of soil gas (1.2 m3 over 4 hours) mixes with 244 m3 of indoor air. Subsequently, soil gas is diluted by a factor of 200, and indoor vapor concentrations will equal 0.5% of subslab levels. Indoor air turns over every hour, using commercial building defaults, so indoor concentrations will be 0.12% of subslab levels. Compare this to EPA’s default subslab attenuation factor (AF) of 3%! Not surprisingly, there are many arguments here, so we’ll discuss AFs in the next issue of Focus on the Environment.