Vapor-intrusion measurements with electronic equipment are frequently offered as the solution for monitoring short-term risks. In this issue of Focus on the Environment, we’ll discuss the promises and pitfalls of electronic monitoring. 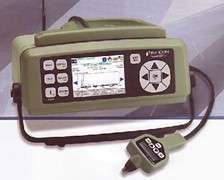 Currently, TCE is perhaps the greatest driver of vapor intrusion, due to a study indicating a link between TCE and fetal heart defects. In the past, many or most of the concerns with vapor intrusion were tied to long-term exposures, i.e., a period of years or decades. Samples were most often collected with stainless-steel canisters, so-called “Summa cans”, which typically drew in the air over the course of 8 hours in a commercial/industrial setting or 24 hours in a residential setting. Several samples collected over the course of a year or two were thought to adequately characterize the long-term risks. But because fetal heart defects potentially result from exposure periods of weeks, days, or even hours, a long-term average concentration doesn’t help. Canisters are perfectly able to sample air over short periods, but recognizing daily excursions would require collecting a sample every day. That would be cost-prohibitive, and the laboratory results wouldn’t be known until after the short-term exposure occurred. Sorbent samples are gaining popularity for vapor intrusion, but they suffer the same limitations of cost, and time lag before getting analytical results.

Electronic detectors seem to offer a solution. Depending on the device, electronic devices can collect concentration data continuously, or at least every 10 minutes, or so, and the data can be automatically uploaded to databases, emails, and alarm systems. Last month saw the release of the Massachusetts Department of Environmental Protection’s (MassDEP) Vapor Intrusion Guidance. It says, “The presence of VOCs in indoor air attributable to a disposal site at concentrations that pose or could pose an Imminent Hazard require notification to MassDEP within 2 hours of obtaining knowledge of the Imminent Hazard condition and trigger an Immediate Response Action.” (Emphasis added). The guidance doesn’t specify that samples must be analyzed in real-time, but this level of urgency certainly suggests that electronic monitoring might be prudent. Unfortunately, some electronic monitors have serious limitations.

Methane is another constituent of concern for vapor intrusion, due to the potential risk of explosion. Fortunately, detecting methane in real-time is relatively simple. Lower Explosive Limit (LEL) meters typically sound an alarm when flammable gases reach a target level of 10% of the LEL, which for methane, equals 0.5%, volumetric. LEL meters are a standard part of the 4-gas monitors used for confined-space entry, which may cost as little as $500. Connecting an LEL meter to an alarm system will add to the costs, but LEL meters are simple and robust, and a detection system will potentially operate for months or years with minimal service needs. Automated methane detection and alarm systems are routinely used to detect landfill gases, and they can do so at a reasonable cost.

Detecting TCE, or some other volatile organic compound (VOC) near its target level is another story. While the target level for methane is 0.5%, volumetric, the target level for TCE is 0.38 parts per billion, volumetric (ppbv), which equals 0.000000038%. Furthermore, flammability detectors do not need to be chemical-specific. All flammable substances pose an explosion risk, and a sensor need not tell them apart. But TCE is generally present with other VOCs of varying toxicity, and it’s necessary to tell one from another. A device that detects specific VOCs at a concentration of 0.000000038% is, well, not your father’s Oldsmobile.

Judging by the Massachusetts 2016 guidance, low-level electronic measurement with field equipment is relatively simple and cost-effective. It says, “The screening of indoor air samples using a portable gas chromatograph/mass spectrometer (GC/MS) allows the investigator to determine within a few hours if an [imminent hazard] IH is likely, and in turn, to implement actions to reduce indoor air impacts and/or relocate sensitive receptors more quickly. Indoor air screening can substantially expedite an investigation of vapor intrusion that involves multiple buildings; same-day results allow for better decision-making in the field, and can save considerable time and money and maximize the information gathered during each sampling event.” (Emphasis added).

The GC/MS is widely used for VOC analysis in laboratory conditions. In a stable environment, with calibrations, every 12 hours, and regular maintenance, a GS/MS provides excellent data at a reasonable cost. Unfortunately, making the GC/MS portable has proven to be tricky. The portable GC/MS has a strong fan base among the people in Homeland Security since it’s capable of sniffing explosives at low levels. The best-known equipment, the Inficon Hapsite, costs well over $100,000, which fits the federal budget, but not ours, and not that of most consultants and property owners. Consequently, most users outside of the federal government are obliged to rent the Hapsite. Availability is limited. Because of their high cost, rental companies avoid having lots of extra equipment on hand, and the wait might be several weeks or more, which probably won’t meet the needs of a rapid-response team. And, of course, leaving a GC/MS in place for long-term monitoring requires a purchase or lease arrangement.

Operating a portable GC/MS requires considerably more expertise than a 4-gas meter, and the only regularly-scheduled training of which we’re aware is offered at Fort Knox, Kentucky, for security reasons. Twice-daily calibrations mean that a stationary device requires the additional cost and complexity of auto-calibration equipment. A simpler device, the portable gas chromatograph (GC), is also capable of detecting specific VOCs at low levels. Unfortunately, it still costs considerably over $30,000 and requires regular calibration and service.

If a portable GC/MS in the hands of Homeland Security protects us from disaster, it’s worth every penny. But in my opinion, real-time monitoring for specific VOCs in environmental applications is unlikely to “save considerable time and money”, especially in permanent installations. We’ll get there, no doubt, but we’re not there yet.