Federal and state guidance has had a lot to say about how to test for vapor intrusion, and most guidance recommends testing indoor air soon after installing a mitigation system if one is needed. But much less has been said about how, and how often to test a mitigation system in subsequent months and years. In this issue of Focus on the Environment, we’ll discuss the long-term monitoring of vapor-mitigation systems.

There are many parallels between the realms of vapor intrusion and radon, but there are many differences as well. One difference is in the approach to testing the effectiveness of mitigation systems. Both radon and vapor intrusion are typically mitigated via Sub-Slab Depressurization (SSD), in which pipes are installed into the lowest floor, and soil gas is drawn through the pipes and exhausted to the exterior with radon fans. But the similarity ends there.

The ANSI/AARST 2014 standard for measuring radon in homes recommends post-mitigation testing of indoor air between 24 hours and 30 days after system installation. The 24-hour minimum allows some time for soil beneath the building to dry out, which could affect radon concentrations. Most other radon guidance has similar recommendations.

For vapor intrusion, post-mitigation testing is normally delayed somewhat longer to allow for the “sink effect”, which is the absorption of vapors by drywall, upholstery, and other building contents. After installing a vapor-mitigation system, vapors can outgas from these sinks, back to indoor air, for several days or weeks. Radon is generally not absorbed by building materials, and radon sources are generally not present in building materials.

According to New Jersey’s 2016 vapor intrusion guidance, “the baseline performance measurements should be collected no sooner than 30 days after the system activation, but not in excess of 60 days (Commission Timeframe). The 30-day timeframe also allows the building time to vent prior to collecting verification IA [indoor air] samples.”

Most state guidance agrees with the 30-day wait period for vapor intrusion, and Wisconsin’s 2010 guidance says that, “Verification samples should be collected after the system has been operating a minimum of 3 months” [emphasis added]. On the opposite extreme, the Massachusetts 2016 guidance indicates that, “sampling should be done approximately 7 days after system startup. In the case of an Imminent Hazard, sampling can be conducted as soon as 24 hours after startup” [emphasis added]. (We discussed imminent hazards and Response Action Levels in the September 2016 issue of Focus on the Environment).

Now that we’ve cleared that up (!!), what does post-mitigation testing consist of? Invariably, post-mitigation testing for vapor intrusion requires sampling indoor air to see if vapor concentrations have declined. If concentrations have declined below target levels, the mitigation system is working. If not, the system might need to be modified. But what if some compounds decline and others don’t? That often means that the compounds that declined in concentration are from vapor intrusion, while compounds that didn’t are from indoor or outdoor sources, referred to as “background”. If you installed the mitigation system to eliminate what was actually from indoor sources, you’ve wasted your money. Your best chance of preventing this situation is to understand the ratios of subslab-to-indoor-air concentrations, and to have the analytical lab restrict the list of compounds in indoor air to those previously observed in soil gas.

Not surprisingly, there’s no consensus on how many post-mitigation sampling events are required to verify system performance, but one to three events, with one of them during the heating season, is typical.

After installing a vapor-mitigation system and proving that it works, how does one prove that it continues to work? In the case of a passive system, i.e., one with pipes and/or barriers but no fan, it’s generally necessary to periodically test indoor air indefinitely. For active SSD systems, operation can be verified with a combination of indoor-air testing and ensuring the continued presence of a subslab vacuum.

Active radon- and vapor-mitigation systems are normally equipped with a manometer, which is a gauge that indicates the presence of a vacuum in the riser pipe. The simplest manometers are simply a U-shaped tube filled with liquid, and the difference in height of the liquid columns between one side and the other indicates the amount of vacuum. Higher-budget systems may include an electronic manometer connected to an alarm that provides notification if the vacuum drops below an acceptable level. An even more thorough approach is a system in which vacuum levels are measured beneath the floor at multiple test points. Test points may include Cox-Colvin’s Vapor Pins®, or other points that were installed during earlier mitigation-system pilot testing. 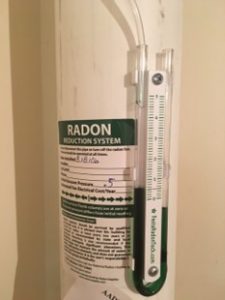 EPA’s OSWER 2015 guidance states that, “Once an adequate demonstration of effectiveness has been made for the vapor intrusion mitigation system, periodic monitoring is recommended to verify that this performance is sustained” They offer several state guidance documents, including California (2011), New Jersey (2014), and Massachusetts (2011) as examples of how one might accomplish this. New Jersey’s updated guidance (2016) recommends a combination of indoor-air testing and subslab vacuum measurements, as shown in their table, below: 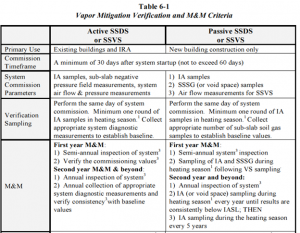 People in the radon world see things differently. I’m currently serving on the committee to update the ANSI/AARST 2014 standard for testing radon in multifamily buildings. (I’ve had radon training, but I have limited radon experience and no certification, and was invited to join the group because I offered a vapor-intrusion perspective). When our group discussed the section on long-term post-mitigation radon monitoring, I suggested measuring subslab vacuums to verify continued system effectiveness, but others in the group would have none of it. Their position was understandable, because radon analyses are far less costly than vapor analyses. A homeowner can currently purchase a radon test kit, including the cost of analysis, for under $14. Additionally, the homeowner can interpret the results themselves by simply answering the question, “Is the radon concentration greater than or equal to 4 picocuries/liter?” In contrast, vapor samples cost hundreds of dollars each to analyze, and they must be collected with specialized equipment, and interpreted by experienced people. The vapor-intrusion community is only recently grappling with long-term monitoring, but most approaches replace some of the indoor-air testing with subslab vacuum readings.

Most of the guidance that addresses long-term monitoring recommends testing indoor air periodically after system installation, typically every five years. In addition, retesting indoor air is recommended after a number of changes that can adversely affect system performance, including:

An advantage of using subslab sample points for long-term vacuum monitoring, is that they also can be tested periodically for vapor concentrations, to determine if vapor intrusion is no longer needed. If subslab vapor concentrations decline through active remediation, or through natural breakdown (which is far more likely in non-chlorinated hydrocarbons), the vapor-mitigation system can generally be decommissioned.

I’d like to point out, by the way, that EPA and others often tout preemptive vapor mitigation, i.e., installing a mitigation system, in lieu of testing. It’s claimed that preemptive mitigation could be more cost-effective in the long run, since it eliminates the need to investigate. But the growing concern over long-term monitoring, and the costs it entails, eliminate much or all of those savings.

In any event, a property owner’s responsibilities don’t end with the installation of a vapor mitigation system, and it’s helpful to understand long-term monitoring before you’re faced with those responsibilities.