The Need for Adequate Site Characterization

In 2010, one of Cox-Colvin’s clients expressed the desire to have us locate the source or sources of VOC contamination beneath one of their manufacturing facilities.  We knew, on the basis of groundwater contamination and the facility’s history of chemical use, that the solvent tetrachloroethene (aka perchloroethene, PCE) was present in soil.  And we knew of several potential sources – two former degreasers, and three above-ground storage tanks (ASTs), one of which had a known PCE spill decades earlier of approximately 50 gallons.  But the PCE plume in groundwater didn’t line up with the suspected source areas.  Fortunately, we had recently developed the Vapor Pin®, and this was the perfect place to test it.

We installed Vapor Pins® sampling devices in a grid configuration with 20-foot spacing.  Two people, equipped with a hand-held rotary hammer, installed, and sampled 30 locations each evening.  We collected soil-gas data with a hand-held meter and collected 144 glass vials for laboratory analysis.  As it turned out, the correlation between field data and subsequent lab results was excellent.  We now collect field parameters at all the points and submit only a few for lab analysis.  Immediately after sampling, we removed the Vapor Pin® samplers for reuse elsewhere, and plugged the holes, leaving little evidence that we had been there.

The lab results surprised us.  As shown in the figure below, the highest levels of PCE contamination did not coincide with suspected sources. 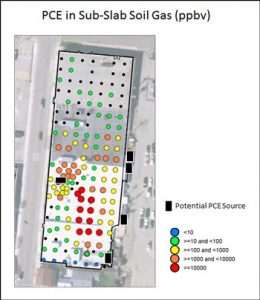 The pictures below show the building configuration through history, based on aerial photographs and Sanborn Fire Insurance maps.  In each picture, the current plant outline is shown in the background, with buildings at the time in question outlined in black.

In 1924, the area was entirely residential.  In 1933, an entrepreneur purchased a building and commenced manufacturing.  The business and the associated building (gray) expanded over time, as shown in the photos for subsequent years.  The building’s front is on the west (left) side, and its back is on the east side.  Interestingly, the areas of maximum contamination aren’t at the degreasers or ASTs.  They’re next to former loading docks and back doors, and they probably resulted from what was, many years later, regarded as improper handling.  Interestingly, the bulk of contaminant mass was located at a depth of 15 feet, and its footprint was revealed through subslab soil gas.

Subsequent investigations conducted with the Vapor Pin® samplers have shown that this pattern is the rule, not the exception.  High-level contamination consistently occurs next to former back doors but building expansion over time obscures the connection.

We find Vapor Pin® samplers to be the best way to collect sub-slab soil gas, but whatever approach one uses, soil contamination is extremely variable over space, and one must collect a lot of data to adequately characterize a site.  Cox-Colvin has used this approach on several facilities, including one which was slated for demolition.  We were able to evaluate the presence or absence of VOC contamination at over 140 locations in several days, using hand-held drills and field meters – far less than the cost of collecting and analyzing soil samples after building removal.

And of course, sub-slab soil gas is essential to evaluating vapor intrusion.  Indoor-air samples are virtually always contaminated with vapors from indoor and outdoor sources, known as “background”.  Therefore, sub-slab soil gas is normally evaluated prior to sampling indoor air.  If it’s necessary to install a vapor-mitigation system, the performance can be verified by monitoring the presence of a vacuum at various points in the sub-slab, via Vapor Pin® sampling device.  Soil gas flows from the area of highest to lowest pressure, and if a vacuum is present everywhere beneath the floor, the system is doing its job.  This concept of monitoring differential pressure is reflected in a recent ASTM standard for the development of long term monitoring plans for vapor mitigation systems (ASTM D8408/D8408M-21).