The NICOLE Latin America network, in association with Vapor Pin Enterprises, Inc. Pin, would like to invite you to a Webinar to be held on November 24, from 10:00 am to 11:30 am (Buenos Aires time), "Steam Intrusion and Soil Gas Sampling Techniques Using Passive and Active Samplers for Efficient Characterization will be held. of the Area ".The event will be free and open to the general public . The confirmed presenters are Laurie Chilcote and Craig Cox (Vapor Pin Enterprises, Inc.), Bruno Ferreira (Arcadis) and Leonardo Pflüger (Department of Environment and Sustainable Development of the Argentine Nation). They will present the main concepts involved in the Steam Intrusion topic and interesting case studies. Learn more about the speakers by accessing the attached PDF!Register now by accessing the event page through the following link:https://lnkd.in/eHU2S9UwThe webinar will be presented in English and Spanish, with simultaneous translation between both languages.#activesampling #passivesampling #vaporintrusion #VI #AVIP#argentine #environment #latinamerica ... See MoreSee Less

NEW - Tygon Connectors!The Vapor Pin® Kit is designed to make your use of our products a success each time. However, one item was previously not included - the connector to match the barb fitting to the sample train. From this point forward, our kits will include Tygon connectors to bridge the distance between your sampling train and the Vapor Pin® Sampling Device. You may also purchase a bag of Tygon connectors separately or in 5 foot lengths.https://www.vaporpin.com/product/tygon-connectors-10-pieces/ ... See MoreSee Less
Vapor Pin is at Ferrara.

Have you see our Virtual Booth for the UK Brownfield Summit.https://www.brownfieldsummit.com/vaporpin ... See MoreSee Less

ESP is the first US-based Distributor of Vapor Pin Enterprises, Inc.’s Revolutionary Vapor Pin ® System. This patented Subslab soil-gas sampling system is one of the most requested solutions for existing and new constructions. If you have any orders after 5 pm EST, that you need delivered OVERNIGHT, please click the link below.https://www.shop-esp.com/Vapor-Pin-System.aspx ... See MoreSee Less

You are invited to hear Laurie Chilcote & Craig Cox give a technical presentation tomorrow (7/21) about Selecting the Right VI Equipment on EnviroClass.com.EnviroClass.com is the leading webinar platform for online PDHs in the environmental industry with world renowned speakers for Remediation, Vapor Intrusion, Wastewater, and Air Quality. Their training has been approved by geologic and environmental engineering boards in 47 states across the US. Tuesday, July 21st; 12-2:00 pm EST – Selecting the Right VI EquipmentSpeaker 1: Laurie Chilcote and Craig Cox, Vapor PinSpeaker 2: John Iannotti, Technical Sales Representative with Pine EnvironmentalREGISTER: https://www.enviroclass.com/event/selecting-the-right-vi-equipment/The cost for each webinar is $35; however, since you’ve been a valued customer of Vapor Pin through the years, we’d like to offer this webinar for free. Just type in FREE in the discount code field when you register for the webinar. ... See MoreSee Less

You are invited to hear Laurie Chilcote, Craig Cox and Julio Zimbron give a technical presentation about VI - Soil Gas Sampling on EnviroClass.com - Wednesday, June 17th from 12-2:00pm EST. EnviroClass.com is the leading webinar platform for online PDHs in the environmental industry with world renowned speakers for Remediation, Vapor Intrusion, Wastewater, and Air Quality. Their training has been approved by geologic and environmental engineering boards in 47 states across the US.Wednesday, June 17th; 12-2:00 pm EST – VI - Soil Gas SamplingSpeaker 1: Laurie Chilcote & Craig Cox, Vapor PinSpeaker 2: Julio Zimbron, President of E-FluxREGISTER: https://www.enviroclass.com/event/vi-soil-gas-sampling/ The cost for each webinar is $35; however, since you’ve been a valued customer of Vapor Pin through the years, we’d like to offer you a 60% discount for this webinar. Just type in VAPOR in the discount code field when you register for the webinar ... See MoreSee Less

Don't miss out, join us next week at one or all of the following webinars to see and be seen!Tuesday - May 19th with Brownfield Summit, Craig Cox will be presenting at 10:35 EST - Evaluating and Remediating a Complex Contaminated Groundwater Plumehttps://www.brownfieldsummit.com/programmeWednesday - May 20th with MSECA - Craig Cox will be presenting on Sanitary Sewers as the Expected Preferential Pathway in Vapor Intrusion Evaluations.http://mseca.org/2020-05_-_Seminar.phpThursday - May 20th with Alpha Labs, Join Craig Cox and Laurie Chilcote as they do a live sub-slab demo Vapor Intrusion: Sampling with Confidence for Mid-Atlantic Stateshttps://register.gotowebinar.com/register/8677107578848466445 ... See MoreSee Less
Vapor Pin

We are excited to participate in the virtual seminar Vapor Intrusion: Sampling with Confidence for the Mid-Atlantic region, with Mark Mank of the Maryland Department of the Environment, Todd Creamer of Geosyntec Consultants, Christina Lewis at Langan Engineering & Environmental Services, Craig Cox at Cox-Colvin and Associates, Inc. and our own William Elcoate and Andy Rezendes. This event is free. NJ LSRP CEC Application for credits is pending. Registration is open: https://lnkd.in/djzaP9B ... See MoreSee Less
Vapor Pin

We are OPEN for business, stocked and ready to support you. Please be safe, wash your hands and practice social distancing! ... See MoreSee Less
Vapor Pin

We are OPEN for business. Just noticed are website has a hiccup. If you can't get online, please call our office for direct sales. 614-504-6915.We apologize for the inconvenience and hope to have the site back up momentarily! #vaporpin ... See MoreSee Less
Vapor Pin 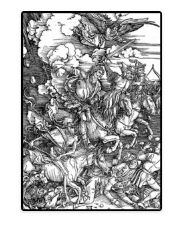 “background” is contamination in indoor air that came from outdoor (ambient) air or from interior sources, such as cleaning products, paints, and plastics. Owners of facilities associated with soil or groundwater contamination might be obliged to mitigate vapors at their own and at surrounding properties, and if they can’t distinguish between vapor intrusion and background, they might be paying for someone else’s problem. Worse, most vapor-mitigation systems prevent soil gas from entering the building, and if vapors are from background, the system won’t help.

EPA’s 2011 report on background contamination shows some interesting trends. The authors compiled the results of indoor-air samples collected from residences with no known or suspected vapor intrusion. As seen in Figure 4 from this report, below, benzene, chloroform, and TCE were present in 91%, 68%, and 43% of residences, respectively. Naphthalene does not appear on this graph, because its molecular weight is somewhere between those of volatile organic compounds (VOCs) and a semi-volatile organic compounds (SVOCs), and was often excluded from VOC sampling. But the toxicity and volatility of naphthalene, together with its widespread occurrence in background, have earned it a place on the list of vapor-intrusion compounds, and on the list of problem compounds. According to the Montana Department of Environmental Quality’s 2012 background investigation, naphthalene was detected in 40 out of 50 residences with no known vapor intrusion. 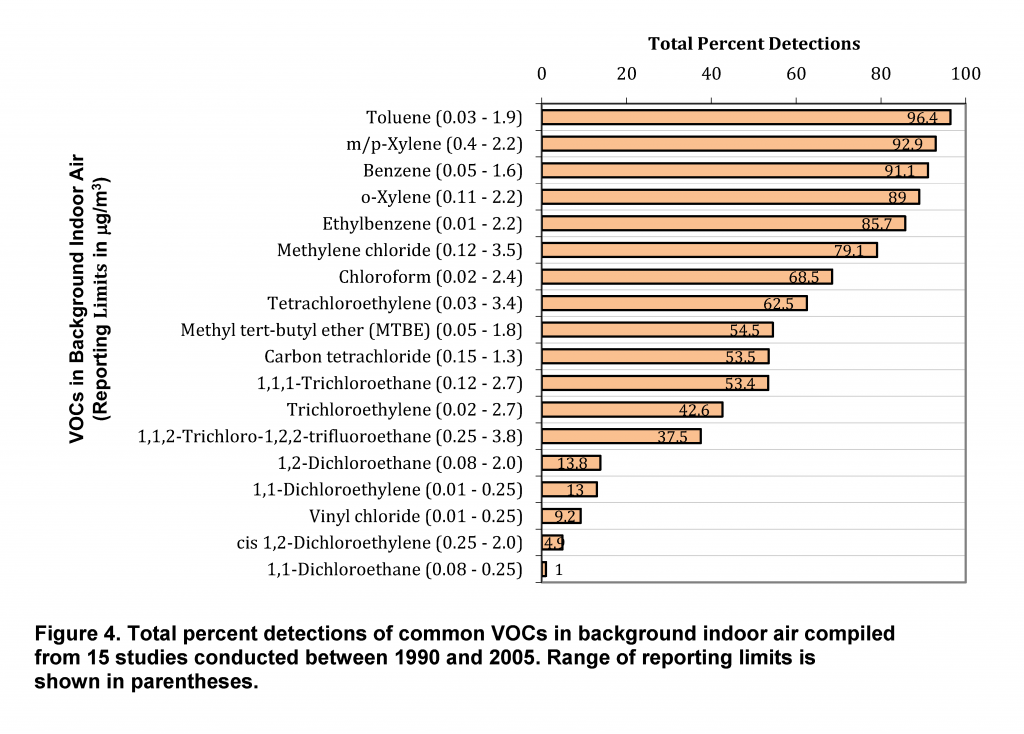 Where do these compounds come from? Benzene is the B in BTEX – benzene, toluene, ethylbenzene, and xylenes, all of which are widely associated with gasoline and other fuels. Benzene poses the greatest problem of the BTEX compounds, since the other three have comparatively low toxicity. Benzene is also the base for countless manufactured chemicals, so of course, benzene is commonly detected in the subsurface, and is a common constituent of concern for vapor intrusion. Benzene is also ubiquitous in ambient air, especially in metropolitan areas, due to vehicular traffic and fuels. Benzene also can be expected in background in buildings with attached garages, due to its presence in vehicular gas tanks, gas-storage cans, and lawn equipment.

Chloroform is normally present in chlorinated water, and not surprisingly, chlorine is common in indoor air. But tap water is not the only source, and perhaps, not the most important source of chlorine in indoor air. At vapor-intrusion conferences, speakers often report high levels of chloroform in indoor air, but when I ask them where they think it came from, they rarely have an answer. However, a number of recent investigations have focused on sewer gas, and found that dry plumbing traps, breached toilet-wax rings, loose pipe fittings, and other conditions often allow sewer gas to enter buildings, bringing chlorine with it. Whatever the source of chloroform in background, Massachusetts’ 2008 Technical Update – Residential Typical Indoor Air Concentrations indicates a median concentration for chloroform of 1.9 ug/m3. The residential VISL in Ohio is 1.2 ug/m3. Good luck with that.

At one time, naphthalene was the main ingredient in mothballs, but it’s been replaced by chlorinated compounds to reduce the risk of fire. Naphthalene is typically associated with coal and the heavier petroleum oils. Naphthalene has the lowest residential indoor-air VISL of the big four compounds, at 0.83 micrograms per cubic meter (0.83 ug/m3), using Ohio standards of 10-5 cancer risk, and a hazard index of 1 for non-carcinogenic compounds. Consequently, the lab’s reporting level for naphthalene, even using 6-liter “Summa” cans, might exceed indoor air screening levels, unless results are reported to Method Detection Levels (MDLs). Reporting to MDLs generally results in the detection of numerous additional compounds, making data validation and interpretation more complicated and costly. The additional information seldom changes the final assessment, but if ya’ gotta, ya’ gotta.

And, finally, TCE rounds out the list of four bad players. We’ve discussed TCE a number of times, including in the August 2017 edition of Focus on the Environment, but in case you haven’t heard, TCE drives most of the vapor-intrusion work in recent years, due to concerns over fetal heart defects. Much or most of the concern with vapor intrusion is tied to the risk of cancer, which generally develops over years or decades. Although, as discussed in previous articles, the link between TCE exposure and fetal heart defects is in doubt, EPA assumes that a single day of exposure to TCE is sufficient to cause harm, so regulatory agencies are prioritizing TCE sites and pushing for rapid vapor-intrusion assessments.

How do we deal with these four compounds in vapor intrusion? Primarily, one establishes whether they’re from vapor intrusion or background. This involves:

More often than not, one or more of the problem compounds represent background, and cumulative risk from the remaining compounds is acceptable. Understanding the sources and significance of these four compounds is critical to eliminating unnecessary costs and efforts.

Author: Mort Schmidt is a Senior Scientist with Cox-Colvin & Associates, Inc. He received his BS and MS degrees in Geology and Mineralogy from The Ohio State University, and has been a Cox Colvin & Associates employee since 1997. His areas of expertise include vapor intrusion and contaminant investigation and analysis, and he currently serves as Cox Colvin’s Practice Leader – Vapor Intrusion Services. Mort is a Certified Professional Geologist with AIPG and is a registered Geologist in Indiana.